ChatterPix Kids! What are you waiting for? 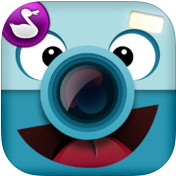 ChatterPix Kids is a free iPad app that students can use to turn pictures into talking pictures. To create a talking picture just snap a picture with your iPad or import a picture from your iPad’s camera roll. After taking the picture just draw in a face and tap the record button to make your picture talk. Your recording can be up to thirty seconds in length. Before publishing your talking picture you can add fun stickers, text, and frames to your picture. Finished Chatter Pix projects are saved to your camera roll and from there you can export it to a number of services including YouTube.
ChatterPix Kids doesn’t require students to create an account in order to use the service. Using the app could be a great way to get students to bring simple stories to life.


This can be used for many different things in the classroom.
1. Use it at the start of the year as an introduction


3. Geography
Students can use a photo or draw a picture, with Doodle Buddy, of a destination and act as a travel reporter.

4. Literacy
Writing: Students can plan, compose and write the script.
Oral Language: Use to develop expression, tone, pace and intonation.
Reading: Take a photo of the front page of a book and record a .30 second book review, draw a character from the book, take a photo and then record the narration of the character offering an explanation for their actions.

5. Math
Students can create a math problem & draw an illustration in Doodle Buddy to go with it. They can then create a ChatterPix using the illustration to explain the problem.

Popular posts from this blog

May 04, 2019
Have you been thinking about saving trees by cutting back on paper usage in your classroom? If your answer is yes, you may want to consider utilizing Google Classroom. Many of our 2nd-12th grade teachers have taken the plunge and are now beginning to see the benefits. Gone are the days of lugging around back breaking crates loaded with spiral notebooks. Now, you can easily grade assignments with your mobile device, while enjoying some smooth jazz at your local coffee house. Google for Education has a site that is extremely helpful in our cause to work smarter not harder. Here's the link. Follow it if you know what's good for you.  I really love the   9 short videos  from the Teachers Lounge at the bottom of the page. They  are extremely lovely in their succinctness.  Video 1 of 9 Ok, so maybe watching videos isn't your cup of tea. Perhaps you prefer reading through material to gain deeper understanding of a new topic or skill. You're in luck! Go ahead a
1 comment
Read more

February 09, 2015
Stop Motion Studio is a powerful, easy to use app for creating stop motion movies. Stop motion is a powerful animation technique that makes static objects appear to be moving. There are many types of stop motion techniques such as: hand drawing, cut-paper, sand and claymation. Brainstorm When starting a project like this one it is important to make your ideas clear before you start filming.  You should consider what is the “story” you are going to tell.  Remember that you only have up to a minute in which to tell this story. Because of this, I recommend that you use simple experiences to create a short story such as the cut-paper example shown in the storyboard below. While this looks simple, it will require many shots. It’s also a good idea to limit yourself to one or two characters. Storyboarding The purpose of the storyboard is to visually plan out the entire animation. Here is where you begin to think about the “camera work” by showing every shot or important tra
2 comments
Read more

50 Ways to Use Screencastify

May 01, 2019
A screencast is a cool video recording of your computer screen and usually includes audio narration and sometimes, if you're lucky, a webcam window of the radical creator of said video. You know what I'm talking 'bout. Over the past year, the Screencastify team has scoured the internet and talked to a ton of teachers in search of the best classroom screencasting ideas out there. This ebook is a collection of their favorite activities that can be implemented by any teacher. The latest version of this book at screencastify.com/ebook . And if you think that's all I've got for you, then you're horribly mistaken. Here's a link to Screencastify's tutorial page:   Screencastify Tutorial Library . How about taking a free 45-minute certification course taught by Alice Keeler explaining ways to marry Google Apps with Screencastify?
Post a Comment
Read more